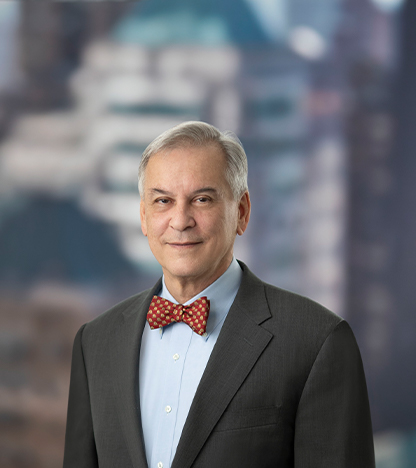 John is a founding partner of LSW, where he has built a widely respected practice that encompasses every aspect of litigation and alternative dispute resolution. Chambers USA describes him as “a classic counselor who is also a superb trial lawyer.”

John is engaged actively in the world of alternative dispute resolution. He is a Fellow of the Chartered Institute of Arbitrators (CIArb), a CIArb Accredited Mediator, and has been named to the National Roster of Commercial Arbitrators and the National Roster of Mediators of the American Arbitration Association. He also is a Distinguished Neutral for the International Institute for Conflict Prevention and Resolution (CPR), and has completed CPR training in online mediation.   John was appointed by the Hon. Kimba Wood of the SDNY to be Special Master in Gulino v. The Board of Education, where he is tasked with recommending individualized backpay and pension awards for 4,700 claimants. With the parties’ consent, he also serves as Court Appointed Mediator in that case. Previously, John was appointed by the Hon. Sidney Stein of the SDNY to serve as Discovery Master and then Mediator in Invista v. DuPont.

John has over 30 years’ experience as a mediator. He is on the National Roster of Mediators of the American Arbitration Association. He has been appointed by federal judges to mediate matters on their dockets and has served on the Southern District of New York Mediation Panel since its inception. He previously served as Special Master in the First Department to mediate cases on appeal. He also has been retained privately to mediate a variety of business disputes.

John draws upon a breadth of experience as a trial lawyer before juries and as an advocate at commercial arbitrations. During over 40 years in private practice, John handled a diversity of ADR proceedings involving intellectual property, copyright, music and publishing contracts, royalty agreements, securities claims, executive employment, labor wages and benefits, professional malpractice, including accountant liability, victims of sexual abuse, among others.

John’s abiding concern for his clients and creative approach to problem-solving result in solutions that avoid the cost and risks of the courtroom. He has been effective in persuading governmental authorities to drop charges altogether. He also has conducted internal investigations for corporate boards and audit committees, advising on pending criminal and regulatory investigations and shareholder derivative demands.

John has profound appreciation for the demands of trial practice as well as the collateral consequences that parallel regulatory proceedings may have on litigants.  His perspective is based on his work as a prosecutor, defense counsel, and panel chair on the Disciplinary Committee for the New York State Supreme Court First Department. He currently serves on the Attorney Panel of the Committee on Grievances for the Second Circuit Court of Appeals.

John was appointed by the Honorable John G. Roberts, Jr., Chief Justice of the Supreme Court of the United States, to the Judicial Conference Advisory Committee on Criminal Rules, for two consecutive three-year terms from 2012 to 2018. A fellow of the American College of Trial Lawyers, he also has served on the organization’s Board of Regents and as a trustee of its Foundation.

John is an Adjunct Professor at New York University School of Law, where he has taught for over 42 years. He also has taught classes at Harvard Law School, Hofstra Law School, Cardozo Law School, Columbia Business School, and the National Institute for Trial Advocacy Training (NITA).

John is a co-author—along with the late Hon. Leonard Sand and Hon. Jed Rakoff—of Modern Federal Jury Instructions (civil and criminal), published by Matthew Bender, as well as numerous articles and book chapters on a variety of topics, including “Lawyer-Mediator’s Dilemma to Report Misconduct but Maintain Confidentiality” (NYLJ).

John has handled numerous pro bono matters, including authoring an amicus brief to gain the resentencing of a juvenile who had been sentenced to mandatory life without parole.

John’s commitment to giving back includes active participation in bar and community organizations, where he has served as chair, officer, and board member.

Earlier in his career, John served as an Assistant United States Attorney in the Civil and Criminal Divisions of the U.S. Attorney’s Office for the Southern District of New York, where he prosecuted U.S. v. Chiarella, the first-ever criminal insider trading case.

“One of the deans of the white-collar bar … an outstanding lawyer who is respected by all.”

“A giant in this space and a thoughtful problem-solver who can offer solutions and strategies built upon years of experience.”

“John Siffert maintains his reputation as an experienced counselor and trial lawyer to individuals and corporations facing significant criminal proceedings.”

“Obstruction of Justice,” The Encyclopedia of Criminology and Criminal Justice (2011) (co-author with Kathryn Malizia)

John Siffert speaks on French and US Criminal Law at the ACTL Annual Program, (January 1, 2014)