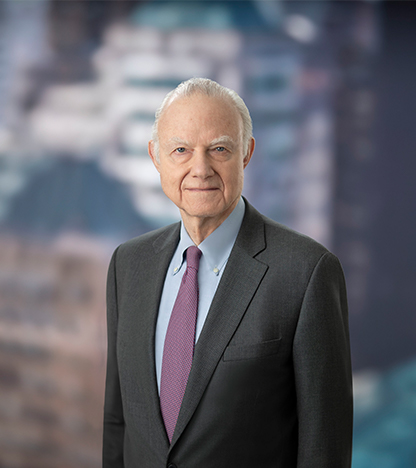 Called “the best in class” by Chambers USA, Frank is a litigator who represents individuals and entities in complex civil litigation, regulatory enforcement, and white collar criminal matters. His clients include a wide range of for-profit and nonprofit entities, including financial institutions, public and private corporations, law firms, universities, and hospitals. Frank has also represented a broad spectrum of individuals, from business executives to financial market participants, lawyers, accountants, art dealers, and other professionals.  Earlier in his career, Frank served in the United States Attorney’s Office for the Southern District of New York, where he was appointed Assistant Chief of the Criminal Division and subsequently Chief of the Civil Division.  More recently, he served as the President of the Federal Bar Council.

A founding partner of LSW, Frank has appeared as prosecutor or defense counsel in numerous criminal trials and appeals and as plaintiff or defense counsel in civil cases. In many of these matters, he has helped clients avoid public charges and court proceedings. In others, he has acted as counsel in trials, arbitrations, and appeals. Frank has also acted as an arbitrator in commercial arbitrations and as independent counsel to boards of directors and board committees of both for-profit and nonprofit entities.

Frank has devoted a substantial portion of his practice to attorney ethics matters, defending lawyers and law firms and appearing as an expert witness and serving as a member of the Departmental Disciplinary Committee of the First Department of the New York Supreme Court Appellate Division, the Attorney Grievance Committee of the United States District Court for the Southern District of New York and on the Ethics and Professional Responsibility Committees of the New York City Bar Association.  Beginning in 2006, Frank has chaired annual New York City Bar Association programs on current ethical and strategic issues in corporate investigations. Additionally, he has served as a panelist at American Law Institute-American Bar Association and American Conference Institute programs and as a faculty member for the National Institute for Trial Advocacy’s (NITA) trial practice and civil discovery programs.

“A very wise and strategic attorney”